Update of our decoding Prism

Every year, we update our decoding prism. This prism enable us, within the association, to decode faster by having a common referential and vocabulary.

As a reminder, in optics, a prism is a piece of glass shaped with a sharp angle, that diffracts light. With a prism, you realize that the light, which appears at first all-white, is a mix of all the colors of the rainbow. This is what we expect to do with our reading prism: decipher the new trends in multiple canals and recognize which usages they involve and how it could, or could not, transpose in your market.

A paradigm shift, is a mental change of perspective obtained by accepting a different point of view or by “changing glasses”. For a leader, a paradigm shift is considering a 180 degree change of his management principles: “You learned this and that at school and University, you put it into practice for 30 years and now, since we entered this new era, you might have to do a complete change of mind and habits.”

These paradigms are helpful to make you think differently and we will use them to put light on what we see during the year.

Mr. Moore, Intel’s boss in 1967, told his team of buyers to make long term contracts with their suppliers in which, every year, the components should be twice as powerful and twice cheaper. This empiric law applies well on average for Intel and in general in the field of electronics. Peter Diamandis and Ray Kurzweil from the Singularity University told us, 6 years ago, that there was not 1 … but 8 technologies surfing Moore’s Law: infinite computing, sensor, robotic, nano material, synthetic biology, digital medicine, AI and 3D printing.

From this list, in the last 3 to 4 years one could think that 3D printing was not eligible given the lack of progress observed in everyday life. But recently in Q2 2017, many players including HP announced major developments in 3D printing with print speeds increased by a hundred.

Furthermore, it seems obvious today that the batteries  and photovoltaic panels should be added to the list … as illustrated below with the price decay curve of a battery. 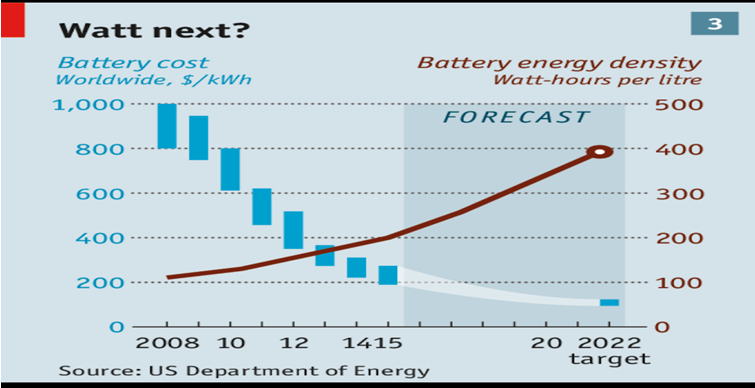 This is why, in Australia, Elon Musk sold at a loss his first battery farm to help prevent electrical blackout. Elon has well integrated, unlike many of his skeptical commentators, that Moore’s Law progress will bring profitability some day.

Mass collaboration fuels the speed of innovation and feeds “Open Innovation” as well illustrated by the case Hyperloop.

Recently China, followed by India and Africa joined the global ecosystem of mass collaboration with global codes propagated by children. You will see in the chapter about  India how, within 3 years, 600 million Indians will join this mass collaboration. And let us remember, “that man has genius only when he is 20 and is hungry“… which is certainly the case of the 600 million Indians who, until now, where outside the sharing economy and the knowledge economy and whose median age is 27… compared to us, Europeans, overfed, whose median age is now 42 years.

Rifkin, a contemporary economist from Washington, who in particular advises the Nord-Pas-de-Calais’ region in its energy transition, found that for every major transition in economy, there is a new source of energy and a new source of information. For example for the smart grid, which is defined as the local exchange of low density energy, internet plays both these roles.

Elon Musk is implementing this with the Tesla car which is a step on the smart grid process: it takes “batteries on wheels” to exchange local energy including from home to work.

To shape his vision, he built:

4. Disintermediation up to the Sharing Economy

We will also put some light on the many local experiences where people do copy business models already proven but with a center of gravity not on dividends but on sharing.

The paradigm is on the second half ot the title…Looking at the world of influencers who, overnight, can break a company’s reputation after a misstep that may seem benign, this paradigm is becoming more and more significant. (Example with United Airlines who ruin his reputation in 2009 when a singer had his guitar broken and whose YouTube video has been seen 17 million times United breaks guitars).

6. The platform is the winner

We will try, in the following chapters, to find out the success keys for having a winning platform.

We are beginning to see antitrust actions against platforms like Amazon or Google. Since the service offered by the platform is free, it is hard to regulate.

Very popular nowdays…Our analysis grid shows that we have 5 different components of our life and therefore we need 5 Trustees.

These 5 components of our life are:

Finally, what we saw over the last few years enabled us to outline the conditions for a solid network led by a trusted third party. It is necessary to have together three conditions:

Over the past 7 years, we went from 5 transverse consumer expectations to 10 as illustrated in the field of music: 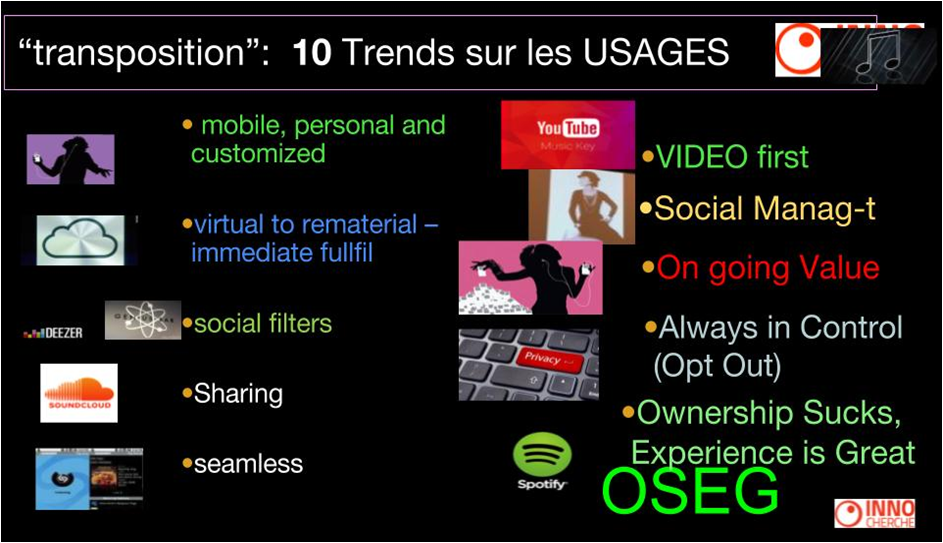 Have a good year of decoding new usages and innovation