Autonomous vehicle (AV) will be coming … but not from the West.

From Oct 28-30, Israel hosted the 7th edition of the Smart Mobility Summit. We were there, and here are our insights.

Clearly all the Full autonomous drive hype of the past years was gone. Each of the 4,000 attendees from 40 countries could feel it. Most discussions were focused on the hurdles faced by future autonomous vehicles. Considering the restrictive (if not non-existing) regulations, potential cyber threats, lack of meaningful and reliable maps, and endless edge cases, the question is no longer how our cars can become autonomous, but when, and more critically in the context of which framework and rules.

Despite its small domestic market, Israel has succeeded in creating a vibrant ecosystem of 600 mobility startups. Many of them had (or still have) their eyes set on the promising L5 graal. Among others, it was the case of low-cost LiDAR startup Oryx Vision, which came to the understanding two months ago that it will be a much longer game than originally anticipated, and decided to shut down, preserving what was left of its investors’ war treasure.

A few years ago, everyone especially in the US, seemed to be lining up in frenzy chanting the same lyrics: from the “AVs are on their way…” to “A multi-trillion dollar opportunity is being born”, we’ve heard many hits that sounded like “Say goodbye to road fatalities”.

Fast forward to the end of 2019, a lot of delay announcements made by the US players (GM, Waymo, Uber …) are raising concerns about the feasibility of the AV project. If you listen only to those feedbacks, future seems gloomy. Hopefully, the newsarriving from the East – China and Israel – are much more realistic and optimistic. 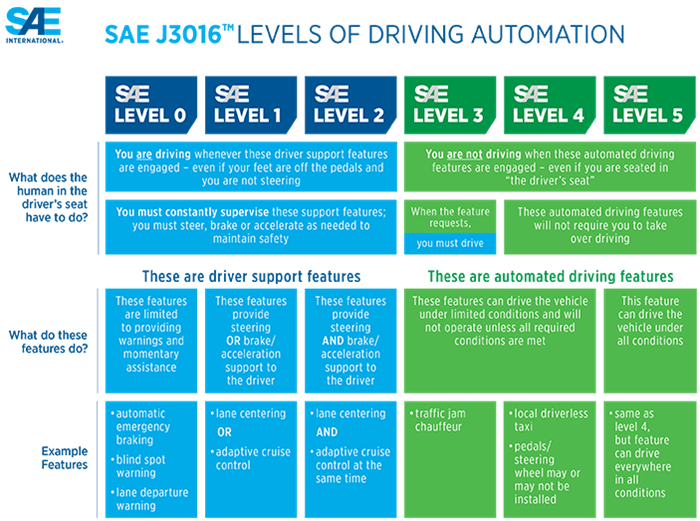 For many players, the journey resembles that of a racing track, gradually moving from L1 to the ultimate L5 level of full autonomy. We’re probably now somewhere halfway – though it is a non-linear time curve – and need a pit stop in order to reach the checkered flag.

In this endurance race, a few players are leading the pack such as Waymo, Cruise, Tesla, and of course Mobileye. But for Mobileye, the leader in driving assistance systems, the approach is different.

During the last CES edition, cutting off the postponements made by the other players, Mobileye announced that theRobo-taxi service will be in launched together with Volkswagen, and rolled out in Tel Aviv by 2022.Another small-scale pilot will start in collaboration with RATP in the roads of Paris in the summer of 2020. Sizable trials should also start in China in the next two years. 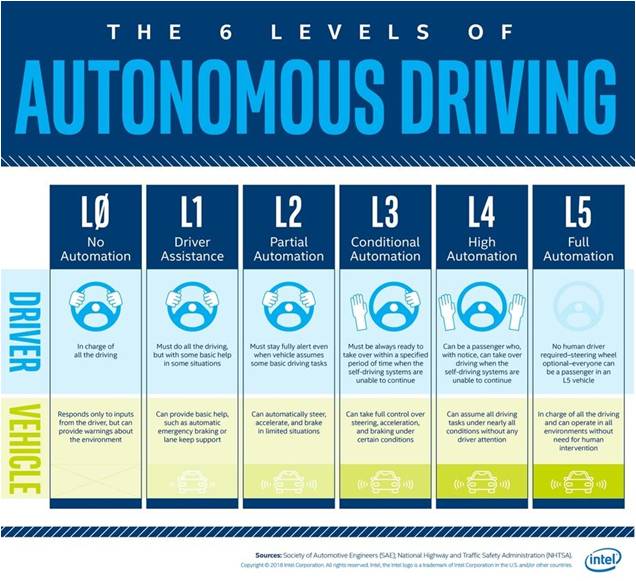 InnoCherche was there, attending CES in January this year, and witnessed one of the top highlights when Amnon Shashua, CEO of Mobileyecontinued in the same panel bystating that the automotive industry made a huge mistake. ADAS L1 to L5 should not be put in the same basket, when these are in fact 2 different subjects:

Robotaxis first… but where?

As per geography, the US is a magnet for capital matching innovative technologies, while China thanks to its centralized government system has the ability to move the needle more quickly. Therefore, even though the AV leaders are mostly concentrated in the US, it is reasonable to think that the first operational fleets of AVs will be driving on Chinese pavement.

The Chinese government has clearly taken another course (as explained in this article of the Economist of October 22):

At the crossroad between two giants – the US and China – Israel is perfectly located to witness and analyze the behind-the-road trends at work especially with a strong expertise in Cyber defense, 600 automotive startups, and a strong industry leader like Mobileye.

Once benefits in terms of mobility for all, pollution, traffic jams and accidents, would have been demonstrated in China and Israel, it might be rolled out country by country, as a compulsory measure for coping with today’s 1,3 Million death toll on the roads.

Last week, the Israeli-based new Intel flagship, held its first investor summit since its $15.3bn acquisition two years ago. In this public event, Amnon Shashua, the CEO of what is now Intel’s fastest growing business, went on to describe Mobileye’s current market status, but more importantly its roadmap to becoming a complete autonomous mobility provider.

On top of the Robo-taxis pilots in Paris and Tel Aviv mentioned earlier, Mobileye announced a strategic partnership with NIO, a Chinese OEM of premium electric vehicles (competing with Tesla), for developing highly autonomous vehicles (L4) to the consumer market of China.

This probably explains Mobileye’s strategy to delay its Robo-taxis offering for the US, once it will have been successfully rolled out, and not less importantly accepted, in Tel Aviv in 2022.

At the same time, Mobileye has a clear long-term ambition to have a vertical control over the food chain and continues challenging the status quo. We heard Amnon Shashua explaining in Las Vegas last January that the AI rule engine algorithm is due to become open source in order to be audited by each country’s Department of Transportation (DOT) and that there is no possible competition there.  For the rest, competition will be on the sensor and hardware where Mobileye just officially announced 10 days ago that they are developing their own LiDAR and imaging radar sensors.

The road seems to be leading to two simultaneous tracks

The first and main path will focus on enhancing the driving assistance stack, contribute to saving people’s lives from deadly road accidents, and power self-driving Robo-taxis serving us with Mobility-as-a-Service (MaaS) and changing forever the mobility as we know it.

The adjacent (and slower) route will have the objective of leveraging those advances until all the pieces fit together and become economically viable. The “mobility for all” revolution will then reach its cruise level under the supervision of the national and local transportation authorities.

The current dramatic adjustments of trends we are witnessing, worry not only the conventional OEMs which market will change forever, but also the endless number of startups which raised double digit millions of capital over the last few years, enjoying the hype and attention given to all the autonomy-enabler wannabes.

Solutions rangefrom very cheap self-driving technology starting with only one camera (likeTesla at its beginning) … up to very sophisticated and costly systems with 3-4 technologies and multiple redundancies to improve safety by a few ppm to reach 99,9999%.

While we already have some technological options, nobody seems today to question the shared assumption that one should not compromise with AV safety, until we reach the near 100% goal. But the real question is where do individuals and governments stand in terms of market-cost acceptability vs death toll acceptability.

This economic and ethical nexus is too complex to be dealt with by a politician alone. In view of the poor performance of human driving, one is legitimate to ask whether and at which price would 10? 1000? self-driving accidents (where Robots kill people) be more or less acceptable than 1,3 million road fatalities every year (where humans kill humans)?