“ChristChurch: Seveso for the social platforms”

“ChristChurch¹: Seveso² for the social platforms” 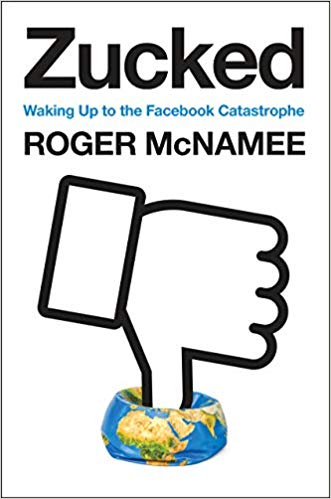 Very interesting conference of Roger McNamee, for the launch of his book “ZUCKED” here in Paris which carries a very simple and very strong advocacy against current platforms and their use of our personal data.

Roger is in his sixties. A Silicon Valley investor, he recognizes he was lucky enough to be at the right time, at the right place when he invested very early in Google then in Facebook. Later he convinced Mark Zuckerberg not to sell Facebook for 1 Billion to Yahoo and became an advisor to Facebook.

He brought Sheryl Sandberg from Google, to become the right hand to Mark Zuckerberg. Everything was going well until 2016 when he noticed the first drifts during the Democratic primaries and then especially with the Brexit campaign. He warned Mark Zuckerberg, telling him to do everything possible not to let his users be influenced by forces they do not understand built into Facebook algorithms. Mark Zuckerberg was in denial by saying “No, I am a platform, I am not responsible! Even the American law said at the time that I am not responsible for the published contents” . For Roger, it is unacceptable: the tool turned against his user, because in the name of making your life easier, it manipulates you from A to Z by exploiting your most primary reflexes in your neocortex with our entrenched “fight or fly ” reflex which leaves me riveted to my screen on subjects that aggress me.

These business models exploit all the science of manipulation, initially to stimulate our shopping desires (which is already quite reprehensible) and then on how to manipulate us in our most personal behaviors such as our democratic vote … or worse our suicidal instinct as measured with an increase of 60% in teenager suicidal rate observed over the past 8 years in the US (NY article).

A thousand times proven and now inscribed in the algorithm, the rule is: “The more it is controversial, the more it is a conspiracy and the more it works, the more it catches attention“. By way of illustration: Alex Jones – who is now disconnected from Facebook – but who, at the time, had 5 Billion likes – was a lonely conspiracionist with more audience that all the mass media together.

By capturing all these bits of information against a free service, these great GAFMs (Google (Youtube), Amazon, Facebook and Microsoft (Xbox and more)) can predict our behavior; as demonstrated by Cambridge Analytica: with 300 likes, the algorithm can better predict your behavior than your spouse!. For example, the algorithm comes to know that a woman is pregnant before she realizes it herself. Some naïve people will say, “Well, it does not matter, we did promotions for diapers and that’s not dramatic.” Lack of education! This information will also be sold to the highest bidder in RTB (Real Time Bidding) and why not to a conspiracionist who will propose to the future mother not to vaccinate the child or even worse tomorrow to Green extremists who will demonstrate that giving birth is the worst thing in terms of CO2 emissions … and so promote abortion.

As a result, extreme manipulation: the information at the right time will tip your decision.

Justin Trudeau told us in VivaTech in May 2019, in a common call launched to end this fake news craziness with Emmanuel Macron and the Prime Minister of New Zealand following the ChristChurch killing, that 50% of the elections in the democratic countries of the world were influenced and manipulated by fakenews distributed by social media in 2018.

What makes the system infernal is that the big four of GAFM control this behavioral tool … and the loop is closed since  we turn back to them to ask for advice and therefore they still have the opportunity to influence us more with their answers.

So what to do? – ChristChurch, the SEVESO of social networks

Two interesting suggestions from Roger McNamee to break the impasse in which we find ourselves in today on personal data and their use to manipulate us.

First, we have to take them accountable for their actions on  their social media platform, as we did in the 1970s after SEVESO to Chemical Industry with the principle of “polluter pays”.

For me, as a former leader of the chemical industry, the Roger McNAMEE’s analogy between the current state of the social networking industry and the chemical industry of the 1960s is very powerful. Until the SEVESO accident of 1976, the chemical industry was not fully held responsible for its pollution; compliance was very relaxed and existing rules were not sufficient to protect the common good. At that time, for the management spending on mitigating risk and pollution more could be seen as contrary to the fiduciary obligations towards its shareholders. After few dramatic events like Seveso, the perception of the public has changed and Chemists have been perceived as the villain and held fully responsible beyond the current regulation. With the principle of “polluter pays”, they were now accountable even on consequences on the well-being of people who could not be anticipated by the policy and regulations of the time. It is up to the entrepreneur, here the chemical industry,  to understand and anticipate the risks he expose the public to … and not “move fast and break things”.

50 years later, the chemical industry is still there, 95% cleaner. Without generating mind-boggling profits, as in years of the robber barons, it continues to innovate and, as a result, is still involved in the making of more than 90% of the product which touch our lives.

According to the analogy, the call of Christ Church is the Seveso of the social industry. From now on, the data industry and its platforms exploiting these technologies should be held responsible for their consequences on the human well-being … even the unintended ones.

In this concept of polluter / payer, the platforms must be hold accountable . They should not be taxed at a pace  of 5 billion a year, as is the case today, but at 50 billion $ a week because if we look at the impact of the manipulation of the elections, the increase in the suicide rate , the disengagement of adolescents, etc. … the impact is huge on our society. Imagine if in the 1960s it had been proven that a media had allowed the Russians to influence an election in the US … the people responsible would have gone to the electric chair !

And then, there is the other problem of GAFAM’s monopoly and abusive power in hiring developers in the software especially in artificial intelligence which prevents any competition. Today, startups must be positioned and prepared from the start against this unfair competition.

The parallel is interesting because the chemical industry changed completely their way of thinking and managed to survive. The parallel with the data industry is good. By forbidding this type of business model of the GAFM based on the manipulation of our individual behavior, the regulator should not forbid any exploitation of personal data, but simply mandate that it is done properly.

How could we do it properly ?

So once we have broken this business model of manipulation by banning it all together, once we have broken these monopolies, what can we do to continue to exploit the data for the good of each individual ? And here Roger, proposes a second idea that looks good:  personal data is part of the human person; it is inseparable from it. Yes, we can ask for help to buy a car and ask that the smart tools of the Cloud gives us the best proposal … but the ownership of personal data shared on this occasion must come back to us and remain always ours … and must not to be ceded as it is today  to be exploited for another purpose.

Finally, to induce a rapid change in behaviour, it is necessary to put pressure on all the brands we trust so that they stop exploiting this tool sold by the platforms in order to manipulate us as customers: stop treating us like little hamsters. To put an end to this kind of marketing behavior, it might be necessary to return to broad broadcasting and no longer to hyper-personalized advertising like today.